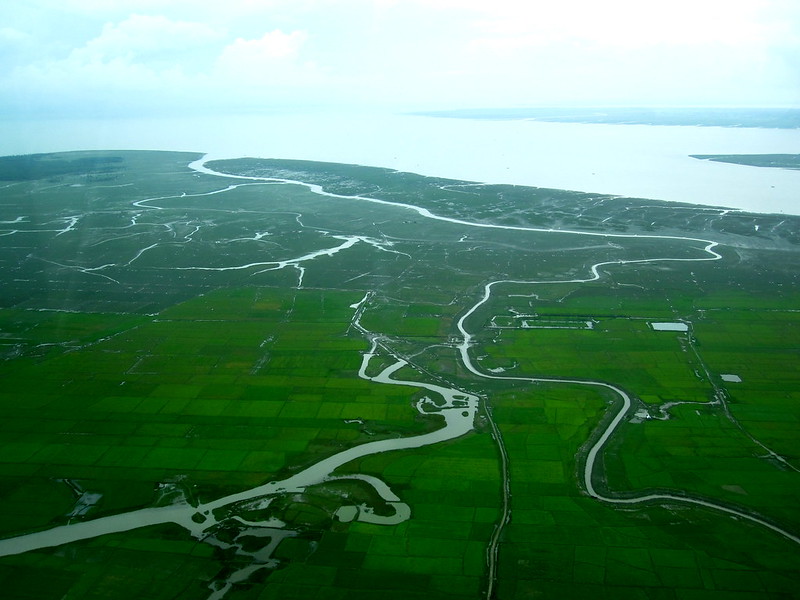 In a January 19 article[1] about the impacts of climate change in Bangladesh[2], The New York Times columnist Nicholas Kristof describes a coastal island on the verge of disappearance and farmers forced to ‘marry off’ their underage daughters as a result of losses linked to sea level rise. This dystopic imaginary of Bangladesh in the time of climate change is well-worn territory. The key points in this ubiquitous narrative include: a land mass disappearing thanks to sea level rise, wretched and desperate inhabitants watching their land and livelihoods wash away, millions of ‘”climate refugees’” flooding out[3] of the small country’s porous borders.

There is no question that climate change is happening – with impacts being felt in Bangladesh as in the rest of the world. Coastal Bangladesh, like coastal Manhattan, will suffer. The inhabitants of both of these communities will have to grapple with an uncertain ecological future.

Yet in narratives like Kristof’s, it is Bangladesh that is the climate shithole (albeit one that warrants our pity rather than scorn). These dystopic climate narratives share parallels with Donald Trump’s already-fabled description[4] of “shithole countries,” migrants from which he believes are not desirable. Even in Kristof’s more humanitarian guise, his narrative similarly conjures up a country defined by powerlessness, inferiority, dependency, and failure.

These ‘shithole narratives’ have real effects. In Bangladesh, the imaginary of an impending (or already existing) climate dystopia has exacerbated the threats faced by coastal communities. It does this by facilitating adaptation interventions that seek to transition people out of rural communities, instead of supporting their continued livelihoods within them. As I document in a recently published study[5], these interventions depend upon a vision of development in which urbanisation and export-led growth are both desirable and inevitable. The narratives also ignore long histories of foreign intervention in this coastal ecology that have made Bangladesh exponentially more vulnerable to the impacts of climate change. This history helps us to see that climate crisis is not, and has never been, inevitable. The global imaginary of Bangladesh as a dystopic climate ‘shithole’ not only anticipates a future climate crisis, it also produces it.

In the 1960s, US and Dutch engineers built a massive system of embankments across Bangladesh’s coast that were intended to expand rice production by closing off the entire coastal estuary and protecting farmland from seasonal monsoon flooding. At the time, it was the pinnacle of experimentation in development engineering schemes. Unfortunately, the designs created by foreign engineers were entirely unsuited to Bangladesh’s tidal geography. The flawed designs resulted in chronic water-logging and land subsidence: essentially, rapid relative sea level rise[6]. In the 1980s, urban elites in Bangladesh saw an opportunity for using these waterlogged coastal lands to cultivate shrimp instead of rice. Responding to growing demand from the US and Europe, and with the support of foreign aid agencies such as USAID and the World Bank, the export industry for frozen shrimp grew quickly. The social and ecological impacts[7] of this expansion have been similarly dramatic. The resulting soil salination has devastated local agricultural production, displacing countless sharecroppers and day labourers who depended on rice farming and subsistence production for their survival. This transition to shrimp cultivation was not inevitable; like the re-engineering of the coastal landscape, it was planned and carried out through outside intervention.

Today, many outside development experts believe[8] that agriculture in the region is no longer viable due to climate change. Instead, shrimp aquaculture, which further increases soil salination, thus compounding the experience of climate change for remaining residents, is celebrated as a key strategy in climate change adaptation in coastal Bangladesh. These adaptation strategies reflect the dystopic visions of a climate-changed future in which rural agricultural production in this region is already doomed. They are predicated on the idea that rural livelihoods in this region may not be worth saving.

Despite the varied and extreme challenges faced by the farmers who inhabit this region, some residents have pursued an alternative vision of the future that challenges this bleak imaginary. Members of landless peasant collectives have mobilised to stem the transition to shrimp cultivation and return to farming rice. Their successes challenge the idea that agrarian production in this region is impossible in the time of climate change. Their efforts make plain that the residents of coastal Bangladesh are not helpless, and are as motivated to secure their own futures as communities in much richer waterfront areas like Manhattan. These residents deserve our solidarity, not our sympathy. Indeed, this solidarity is what climate justice demands of us.

Kasia Paprocki is an Assistant Professor in Department of Geography and Environment at the London School of Economics and Political Science. She did her PhD at Cornell University on Development Sociology focusing on Development Politics and Climate Crisis in Bangladesh. She frequently writes about environment and climate change issues, specially related to Bangladesh.

This article was originally published in Al Jazeera, re-published with the permission of the author.

Featured image: Bangladesh from above, by Mohammad Tauheed, CC BY-NC