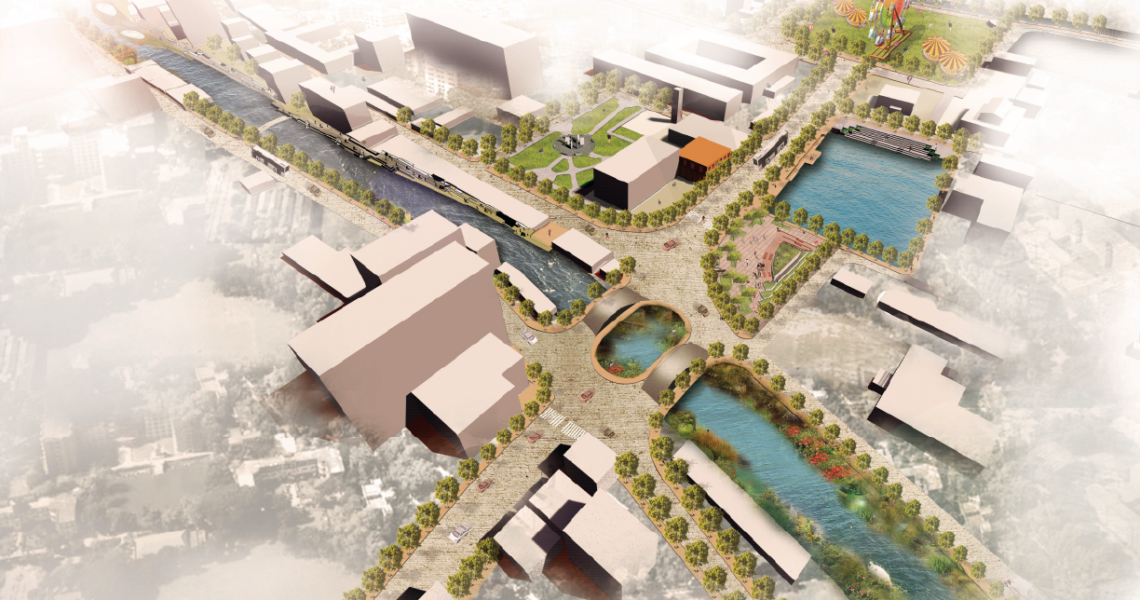 Developing an Urban Plan for Manikganj.

Manikganj is situated 68 km south-west from Dhaka, on the bank of Kaliganga river. The town was probably named after a Muslim preacher, Sufi Manik Shah, who lived on an island by the Ichamati river, presently known as Maniknagar. He would later move near Dhaleswari river, which became the Manikganj town in the early 19th century. Evidences found by the old ghat (jetty), the ancient temple and bazaar shows the settlement flourished as a ganj (a port town) and its main accessibility was provided by the Kaliganga river and a canal named Nodi Balabanta.

Interestingly, the name cannot be found in official records until 1845. In that year, Manikganj Mahakuma (an administrative unit equivalent to a sub-district) was established by the British administrators. It finally became a municipality in 1972. The area of the municipality is 42.38 square kilometre and population in the year 2011 was 71,698. The population has increased to almost 200,000 at present (the figure includes ‘floating population’).

The development proposal for Manikganj also involves restoration of the canal. Rethinking Manikganj is part of a wider scheme by Bengal Institute called ‘Dhaka Nexus’ which seeks to develop the towns around Dhaka in order to reduce the ever increasing pressure on the already overburdened capital. The scheme imagines developing infrastructure to make small towns more livable while maintaining their unique identities. Situated only a few kilometers away from Dhaka, Manikganj is a prime candidate for this process; it has all the possibility of becoming a more livable city with adequate employment, quality educational and healthcare institutions, and functioning transportation system.

Manikganj can be an excellent cultural hub by improvising the cultural activities in existing settings. Situated amidst a lush green landscape, the city provides ample open spaces between government institutions and transport corridors, in between buildings and around the neighborhoods. The dispersed open spaces, ponds and canal fronts, river bank, unutilized spaces between buildings, neglected children’s parks and unplanned residential areas can be reorganized by an integrated land-use plan.

Although, Manikganj Municipality was established in 1972, there is no waste-management-system in the town yet. As a result, the leftover spaces beside roads, canals, ponds and backyards of residential areas are often encroached by disposing waste. Scattered garbage pollutes the environment and spreads infectious diseases. A comprehensive waste management system has been designed to ensure a cleaner and healthier environment in Manikganj town.

There are several interconnected canals that connect the river and numerous ponds in Manikganj. Therefore, redesigning a canal-front to reclaim public spaces would be the an ideal solution to reinvigorate the city. One particular canal, Nodi Balabanta, was selected for its location and historical background to set an example for revising water bodies. It flows through the heart of the town beside an old bazaar; and using the waterway, it had a strong connection with other parts of the country. The canal can still provide a circular water transportation network for the city. Both the sides of the canal can be transformed into lively urban spaces for the inhabitants to promote environmental and health benefits.

The main access road to Manikganj Sadar, connecting the National Highway to the regional highway and passing through Rafiq Chattar and Bijoy Mela Math will be converted into an urban promenade incorporating feeder roads, bridges, sidewalks, open spaces, water bodies and built structures.